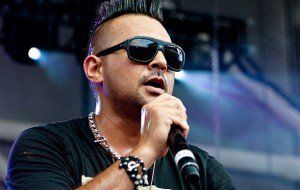 Grammy-winning deejay, Sean Paul is facing death threats after a terrorist group in the Maldives warned the entertainer that they will kill him if he sets foot in the country for a scheduled performance on New Year’s Eve.

In a YouTube video posted late Wednesday night by a Maldivian Jihadi group with links to Syria, they relayed a very cryptic, blunt message to the deejay that should he go through with the set, he may not make it to 2015 alive.

“Sean Paul, if you visit the Maldives, the world will see your burned and blood-drenched dead body,” said one of the group’s members, through cards. “Sean Paul, who is joining from abroad in the celebration of year-end 2014…is a major disbeliever.”

The group went on to bash the country’s celebration of western holidays, claiming such celebrations were degrading the state of local culture.

Despite the threats, Sean Paul is still expected to perform at the show, with the country’s tourism minister,Ahmed Adeeb saying they will not be intimidated by such claims.

“We will not give into threats!” Adeeb said in a tweet. “The show will go on, it is sad to see the level ppl fall, every time we try to promote Maldives & Youth!!”

Neither Sean Paul nor his camp has responded to these threats or whether he will go ahead with the show.

Sean Paul was invited to the show, set for the country’ capital of Male, by their government’s tourism department.

The Maldives is a country in the Indian Ocean made up of several atolls; renowned as being a vacation spot and honeymoon spot.