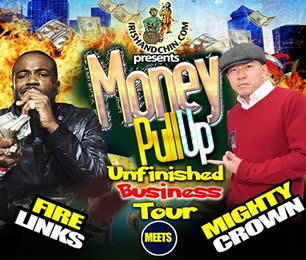 It is a known fact that Fire Links and Mighty Crownare far from friends. In fact, these sounds move more like rivals than anything else. But in the rare instances when Mighty Crown and Fire Linksmeet up, an explosive, intense hardcore juggling experience is guaranteed! Last year, Irish and Chinstaged “Money Pull Up” inHartford, CT, featuring the rivaling sounds and Dancehall fans went crazy. Now, a year after the historical night, due to the demand of the masses, The Far East Rulers and the feisty Fire Links are taking their high level sound system entertainment on the road to settle ‘Unfinished Business’ on their “Money Pull Up” Tour, November 26 -29, 2014.

Staged by Caribbean entertainment gurus Irish and Chin, the “Money Pull Up” Tour will offer sound system aficionados 4 nights of unforgettable action packed performances in East Coast cities, including Boston, Rochester, Bronx and Hartford. This is definitely a special treat for fans and the industry alike. Prior to the landmark “Money Pull Up” in Hartford last year, Mighty Crown had not shared a bill with Fire Links in over a decade. The event was significant, as it showed that even warring sounds with public differences could entertain in a professional, fun manner.

“I think that it’s so important to keep the sound system industry buzzin’ with fresh and exciting concepts,” says Garfield “Chin” Bourne of Irish and Chin. “Bringing sounds together such as Mighty Crown and Fire Links supports a major goal of our R.E.S.E.T. (Restoring Exciting Sound System Entertainment Together) campaign.