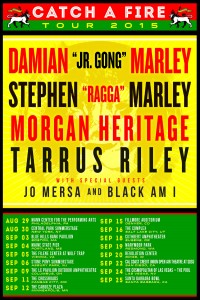 New York City/Jamaica – Morgan Heritage, The Royal Family of Reggae, have just announced their upcoming “Catch A Fire” Tour” with Damian Marley, Stephen Marley, and Tarrus Riley, along with special guests, Jo Mersa Marley and Black Am I. The tour will kick off August 29th in Philly and wrap up September 27th in LA.

Both the Morgan and Marley reggae dynasties are thrilled to finally be on tour together. “The Marley’s and Morgan’s are more than just childhood friends. We are both 2nd generation musicians carrying on our father’s legacies. The Catch A Fire tour is a historic moment for both families because as family our bond goes beyond blood, it’s etched into our souls with the fire. We always spoke of the day when Marley and Morgan would tour together sharing the same stage night in and night out. Well now the time has come and we could not be more joyful to see this dream become a reality.”

Morgan Heritage recently premiered “Wanna Be Loved” (ft. Eric Rachmany of Rebelution) with ThePier.org. On working with Morgan Heritage, Eric Rachmany of Rebelution told ThePier.org, “It’s an honor to collaborate with Morgan Heritage. In my eyes they are one of the best Reggae bands of all time. Their style is like no other out there and their story is remarkable. They sent me ‘Wanna Be Loved’ and I immediately connected with the concept that each and every one simply wants to be loved for who they are.” In addition, Morgan Heritage previously partnered with Billboard.com to premiere the video for their first single, “Perform And Done,” as well as working with Yahoo! Music to premiere “So Amazing,” the second single off the album. The band also teamed up with HitFix to stream the entire record a day before its release.